History of The Maryland Theatre

The Maryland Theatre was built in 1915, at a cost of about $200,000 by the Potomac Realty Company. Designed by Harry E. Yessler of Hagerstown, who also designed the Colonial Theatre across the street and renowned Thomas W. Lamb of New York. Mr. Lamb is recognized for his work on The Hippodrome Theatres as well as Madison Square Garden Theatre in NYC along with theatres in England, Egypt, India, and South Africa. Theatre Doors opened May 10, 1915. First, sell-out audience was treated to music by a live orchestra in the pit as well as a five-reel feature film, “The Commuters”. General seats for this performance cost 10 cents and Box seats were 35 cents.

The Maryland Theatre began as a Vaudville House but when sound came to the movies commercially in 1927, The Theatre received new seating and became primarily a movie theatre. In June 1928, The Maryland Theatre patrons saw their first talking picture, “The Jazz Singer”. All three theatres in Downtown Hagerstown (the Academy, the Colonial and The Maryland Theatre) were owned by the Warner Brothers (1930-1953 Warner Brothers Theaters, 1953-1961 Stanley Warner Management Corporation, and 1961-1969 RKO-Stanley Warner Theaters), so it was not uncommon for an employee to transfer within the theatres. In its first “heyday”, the theatre would attract 1,000-1,100 people for a weekend movie screening and 600-700 in a weeknight. Modern movie theatres would love that kind of crowd, but it is unlikely they would be willing to better The Maryland’s price of $.40 for a movie during that time period. 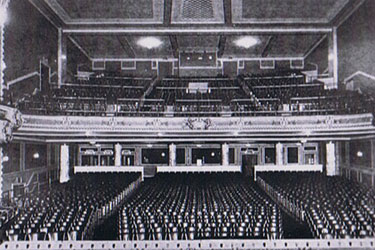 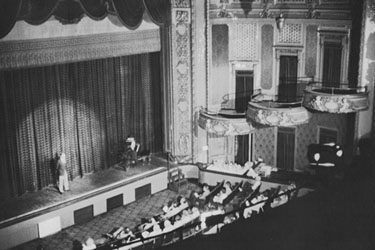 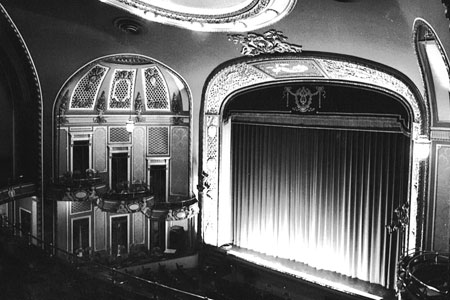 The Theatre was partially destroyed by fire in 1974, which destroyed the front of the Theatre where the lobby is now located and the apartments above but left the historic auditorium virtually untouched. Firemen said that the theatre could have hosted a movie that evening if attendees could’ve stood the smoke. The Theatre fell into disrepair until 1976, when a local funeral director, Gerald N. Minnich purchased The Maryland Theatre only one and one-half months before it was due to be sold to a contractor for its 1,000,000 bricks. The Theatre re-opened in 1978, led by the extraordinary efforts and enthusiasm of local businessman, Jack Garrott. Mr. Garrott and a dedicated group of community members who named themselves “Citizens to Save The Maryland Theatre” gathered donated supplies, services, and monetary gifts to make the re-opening possible. The historic, beautifully restored neoclassical Maryland Theatre had its grand re-opening and has been delighting audiences continually since.

The interior of the five-story structure can be divided into three distinct design elements: the proscenium arch and the stage blockhouse, the orchestra seating and the boxes, and the balcony section plus the interior lobby. The overall design of the space exhibits a strong neoclassical flavor, although there are some later Art Deco additions. Each of these spaces are framed by an arch. Large, curved pendentive areas are created between them at their meeting points. The intrados portion of the proscenium arch bears a classical motif of roundel, anthemion, palmette, and arabesque forms. The extrados of the proscenium arch are beaded mouldings, twisted festoon mouldings, and flowered medallion roundel mouldings. The extrados of the other arches are a simpler running plant-form medallion moulding. The orchestra pit was covered when the theatre was converted for motion pictures. Six tiered, curved boxes grace the orchestra seating area; three on the orchestra seating level and three on the balcony level. These box seats are recessed in a large, arched niche. Elaborate grills crown the interior surface of the upper vault and ovalettes face each box. The balcony section is basically oval in shape. The lower seating in the balcony exhibits strong Art Deco traits, while the upper seating is similar to the neoclassical style of the orchestra seating. The marvelous acoustics in the auditorium are only surpassed by the wonderful ambiance of The Theatre.

The Maryland Theatre is an independent non-profit, managed by a Board of Directors, which is supported by ticket sales and venue rentals, sponsors and donations, and concessions sales. The latter two revenue streams combined are approximately 20% of revenues annually. Additionally, many local and government grants have been awarded in order to complete ongoing capital projects within the facility. The Theatre recently celebrated her 100th Anniversary in 2015, a major facility restoration including restored seating and flooring, upgraded HVAC system, refurbished plaster, and improved fire protection system, has been completed and backstage upgrades include dressing room remodels, modernized rigging systems, refitted curtains. In late 2019, construction of a five-level Performing Arts Center was completed providing much-needed on-site box office, tripling concessions spaces, additional restrooms, and updated fire escape systems. This expansion greatly improved the flow of patrons for the historic auditorium as well as enhancing the patron experience by providing many new amenities. The new Performing Arts Center provides new space for private event-hosting including a VIP Suite, ballroom, event kitchen, cocktail lounge, conference room, and studio. Daily classroom space for WCPS, additional dressing rooms, and a large grand lobby are also included in the new expansion tying together the historic auditorium and the new facility. Creating these additional revenue streams for sustainability by adding larger gathering, rehearsal, and event spaces have increased the usage of the facility.

Today, The Maryland Theatre is the anchor to the Arts & Entertainment district in the city which comprises a new high school for the visual and performing arts (The Barbara Ingram School for the Arts), offices of the Washington County Arts Council and numerous new businesses and retail enterprises. The Theatre provides comfortable seating for 1,293 at over 225 private events and performances annually of artists, comedians, orchestra concerts, children's shows, musicians, recitals, stage shows, including serving as the home of the Maryland Symphony Orchestra, Barbara Ingram School for the Arts, City Ballet School, Authentic Community Theatre, The Miss Maryland Scholarship Pageant, and Hagerstown Community Concert Association as well as many others. The Maryland Theatre welcomes approximately 100,000 people through her doors annually including over 5,000 volunteers and 12,000 local students.

The Theatre’s mission, as a non-profit organization, is to preserve, restore, and maintain The Maryland Theatre as a historic property and to provide quality entertainment, educational and cultural offerings to the community at large.

Before the completed expansion, in 2019, patrons may remember The Maryland Theatre courtyard and temporary box office and concession area, formally known as The McBare building.

The McBare building was built in the latter part of the 1800s and based on Sanborn maps (prepared for fire insurance rating purposes), from 1887 to 1951 the building was used for: retail including clothing, hardware, and jewelry; eating establishments including restaurant, pub and saloons; grocery store; and apartments on the upper floors. Some of the past business names associated with this building include McBare’s Pub, Corvette Restaurant and Lounge, Dry Dock Restaurant and Lounge, Golden Cage Bar, Eagles Restaurant, and Bill’s Grill.

Acquisition by the Maryland Theatre: The McBare building was sold to the Maryland Theatre in 2010 through the cooperation of the Washington County Industrial Foundation (CHIEF) and the City of Hagerstown with a deferred loan that was forgiven after the completed expansion in 2019. At the time, McBare provided much-needed street-front retail space for the box office and concessions rather than the basement level which had been used since the fire in the 1970’s. The McBare building was then connected to the small lobby that was created following the fire.

In 2018, CHIEF graciously granted permission to The Maryland Theatre to demolish the McBare building to make room for the new Performing Arts Center. While the McBare building served as a wonderful temporary box office and concession area, The Maryland Theatre Performing Arts Center has proven to be a great addition to Washington County and the downtown Arts & Entertainment District.

A customized 50’ concessions bar was designed and used in the McBare pub from 2017 until construction began in 2018. The concessions bar was created to be broken down into pieces so it could be properly stored during construction and reinstalled in the new Performing Arts Center. The bar now proudly sits in the 2nd Floor Cocktail Lounge and serves not only as a focal point but a nod back to our history in the McBare building.

Additionally, the stained glass windows were removed from the McBare building and placed in the stair tower for all to enjoy!