This musical, which received rave reviews on its Broadway run, is based on the movie classic that runs round-the-clock on television every Christmas. Set in the 1940s in the fictional town of Hohman, Indiana, the musical follows 9-year-old Ralphie Parker and his quest for the Holy Grail of Christmas gifts—an Official Red Ryder carbine-action 200-shot Range Model air rifle. Rebuffed at every turn with a similar echoing response, Ralphie plots numerous schemes to achieve his desperate desire for the coveted BB gun. All the iconic scenes from the movie are here: Ralphie's friend, Flick, getting his tongue stuck to the flagpole; his brother, Randy, getting dressed in his snowsuit; the bullies, Farkus and Dill; the leg lamp award; the bunny suit; Christmas dinner; and many others. The delightfully versatile score ranges from gentle ballads to show-stopping full-ensemble numbers such as "Ralphie to the Rescue!", "A Major Award," "Sticky Situation," "Up on Santa's Lap," "Somewhere Hovering Over Indiana" and the inevitable "You'll Shoot Your Eye Out!" A Christmas Story, The Musical will bring an exciting new dimension to those who have seen the movie and will certainly stand on its own for those who haven't. 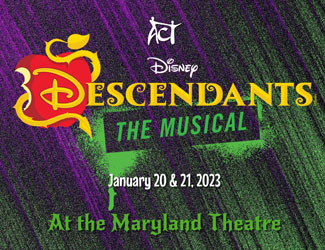 Based on the popular Disney Channel Original Movies, Disney's Descendants The Musical is a brand-new musical jam-packed with comedy, adventure, Disney characters, and hit songs from the films! Imprisoned on the Isle of the Lost home of the most infamous villains who ever lived the teenaged children of Maleficent, the Evil Queen, Jafar, and Cruella De Vil have never ventured off the island until now. When the four troublemakers are sent to attend prep school alongside the children of beloved Disney heroes, they have a difficult choice to make: should they follow in their parents’ wicked footsteps or learn to be good?