The partnership between the Maryland Theatre and Authentic Community Theatre resulted in a realization of their common mission: to bring arts opportunities to community members in Washington County. Authentic Community Theatre seeks to utilize the arts as a catalyst for social change and enhanced community cohesion. They accomplish this mission by offering educational opportunities for students to explore the creative arts and processes, as well as providing professional opportunities for local artists.


Authentic Community Theatre presents Footloose! Visit the historic Maryland Theatre and watch the musical live with a limited, socially-distanced audience Thursday-Saturday. Want to watch and dance along from the comfort of your own home? Then purchase a ticket for the live stream event on Friday, October 23, 2020 at 7:30pm! Live stream tickets are available to purchase until Thursday, October 22 at 5pm. No exceptions! Patrons that purchase a ticket to the Live Stream Event will receive an email with the ticket link and instructions prior to the performance.

When Ren and his mother move from Chicago to a small farming town, he is prepared for the inevitable adjustment period at his new high school. But he's not prepared for the rigorous local edicts, including a ban on dancing instituted by the local preacher, who is determined to exercise control over the town's youth. When the reverend's rebellious daughter sets her sights on Ren, her roughneck boyfriend tries to sabotage Ren's reputation, with many of the locals eager to believe the worst about the new kid. The heartfelt story that emerges pins a father longing for the son he lost against a young man aching for the father who walked out on him.

To the rockin' rhythm of its Oscar and Tony-nominated Top Forty score, augmented with dynamic new songs, Footloose celebrates the wisdom of listening to young people while guiding them with a warm heart and open mind.

Footloose first burst onto the silver screen in 1984 and proved to be one of the year's most successful motion pictures. The soundtrack recording reached #1 on the Billboard charts, and went on to sell over 17 million copies worldwide, generating such Top Forty hits as its title song and "Let's Hear It For The Boy" (both of which received Academy Award nominations), plus "Almost Paradise," "Holding Out For A Hero," and "I'm Free (Heaven Helps the Man)."

The Genie from Broadway's Aladdin the Musical is coming to Hagerstown! Major Attaway, best known for his role as the Genie in Broadway's Aladdin the Musical will be holding a Meet & Greet Opportunity at the Historic Maryland Theatre following the 6 pm performance of Footloose on Saturday, October 24. If you have been to NYC in the last 3 years you have seen his face all over The Great White Way! Major has thrilled tens of thousands of people as the Genie and now he is coming to meet you! Major has been seen on TV shows like Orange is the New Black as DeShaun McAdams and many anime fans have heard his voice in Dragon Ball Z, Yona of the Dawn and many, many more! Come get an autograph and picture with this Broadway and International Movie Star right in your backyard! Meet & Greet tickets are $40 and can be purchased as an add-on event to the Saturday, October 24 at 6 pm performance of Footloose. This special opportunity is hosted by Authentic Community Theatre Inc.

Buddy, a young orphan, mistakenly crawls into Santa's bag of gifts and is transported to the North Pole. The would-be elf is raised, unaware that he is actually a human until his enormous size and poor toy-making abilities cause him to face the truth. With Santa's permission, Buddy embarks on a journey to New York City to find his birth father and discover his true identity. Faced with the harsh realities that his father is on the naughty list and his half-brother doesn't even believe in Santa, Buddy is determined to win over his new family and help New York remember the true meaning of Christmas.

This modern-day holiday classic is sure to make everyone embrace their inner elf. After all, the best way to spread Christmas Cheer is singing loud for all to hear. 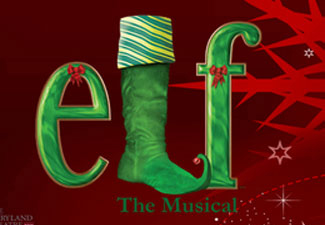