Tom Petty’s career has touched millions of fans, earned him a place in the Rock ‘n Roll Hall of Fame, a star on Hollywood’s Walk of Fame and several Grammy nominations. His popularity continues to grow with every new generation of fans and his remarkable list of hit songs are celebrated by audiences everywhere.

Prior to Tom’s untimely death in 2017, Tom Petty and the Heartbreakers toured and recorded for over 40 years. They engaged in combat with their various record labels, sang about the woes and shortcomings of the music industry in general and the radio stations of the day in particular, and in the process sold more than 80 million records worldwide. Since 1976, no artist had defined “cool” better than Tom Petty, and no band had created a more magical sound together than the spine-chilling perfection that is the Tom Petty and the Heartbreakers song anthology, spanning four decades and touching the lives of millions of Americans many times over.Tom petty was truly one of the great American songwriters.

Since 1992 FULL MOON FEVER, America’s premier Tom Petty and the Heartbreakers tribute band, has brought to life an energetic and ultra-realistic performance of the legendary rock band. As the most authentic and professional Tom Petty tribute band on tour today, Full Moon Fever features an amazing recreation of an actual live Petty concert. You’ll experience the classic sounds of the Rickenbacker guitar, those pitch-perfect harmonies, and the straightforward rock and undeniable raw energy that has come to define the live show of the Rock and Roll Hall of Famers.

This dynamic tribute band truly delivers on their goal of taking you to that same special place. From classics such as “American Girl,” “Refugee,” and “Breakdown” to fan favorites such as “Mary Jane’s Last Dance,” “I Won’t Back Down,” and “Free Fallin’,” Full Moon Fever captures these songs with remarkable poignancy and turns them into an unforgettable live experience! 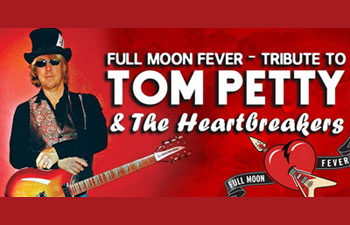