The Maryland Theatre hosts Jay and The Americans

Jay and The Americans first record was "Tonight" (from the Broadway Musical West Side Story), and their breakout hit song was "She Cried". Jay and The Americans next chart hit was "Only In America", followed by top ten hits "Come A Little Bit Closer" and later "This Magic Moment".

Jay and The Americans were a major force in starting the Rock and Roll revival with their album "Wax Museum", where they paid tribute to many great Rock and Roll artists with their versions of such great songs as "Hushabye", "Walkin' In The Rain", and a song that reached the top ten "This Magic Moment". You will hear all of these songs, which are featured in the new Jay and The Americans show.

Be a VIP in The View Studio on Sunday, October 27 one hour prior to Jay and the Americans
Exclusive access includes:
• Two Drink Tickets Good for Beer, Wine or Mixed Drinks
• Light Appetizers
• Private Bathrooms
• Secure Coat/Bag Storage
The View Studio Experience begins one hour prior to showtime and continues through intermission (if intermission if included in this particular performance).

The Sunday, October 27 View Studio Experience can be purchased online as an add-on to your ticket or by calling 301-790-2000! 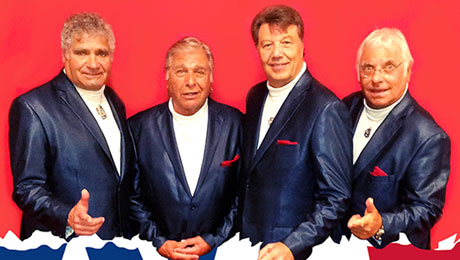