The legendary Nighthawks will rock the Maryland Theatre to kick off the 23rd Annual Western Maryland Blues Fest! Founded in the early 70's in Washington, DC, the band is a musical product of pre-1958 DC radio, when founder Mark Wenner didn't know there were rules against mixing blues, R&B, honky-tonk, country, doo-wop, gospel and rockabilly into one delicious stew. Since then, the 'Hawks have become known as the hardest working band in America. They've performed with the Vaughn brothers, Greg Allman, George Thorogood, Warren Haynes, Muddy Waters, BB King, and others.

Their latest release, "All You Gotta Do," is about as close to perfection as you can get from a blues and American roots band. With Mark Wenner on vocals and harmonica, Johnny Castle on vocals and bass, Paul Bell on guitar, and Mark Stutso on vocals and drums, this incarnation of the band outshines all others.

Opening for the Nighthawks and hailing from our very own South Hagerstown High School, is The South High Commercial Music Ensemble, under the direction of Scott Benford.

The Cabin Fever Blues Bash is sure to heat up your night and get you pumped for the 23rd Annual Western Maryland Blues Fest! 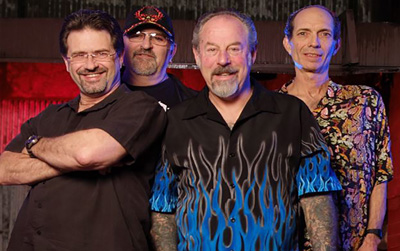