The Maryland Theatre hosts An Evening With Brooks Robinson


From the time Brooks Robinson made his Major League Baseball debut in 1955, until he retired as a player in 1977, he added a new dimension to the third base position. He played his entire 23 year major league career for the Baltimore Orioles. Known as "The Human Vacuum Cleaner" it's been said that he was the best third baseman to ever play the game. During his tenure, the Baltimore Orioles had the best record in all of baseball.

Elected into the Baseball Hall of Fame in 1983, he received nearly 92% of the votes. A higher percentage than even Joe DiMaggio or Mickey Mantle received when they were elected. Brooks was a true gentleman both on and off the field. It's been said that some players get candy bars named after them, but people named their children after Brooks Robinson.

Join us for An Evening with Brooks Robinson at the historic Maryland Theatre where Brooks will share stories about his remarkable career and reminisce about the games and players of his 23 years in the big leagues. Brooks' remarks will be followed by a question and answer period with the audience.

The Pre-Show Meet & Greet Opportunity is a separate ticket to be purchased in addition to An Evening With Brooks Robinson. Meet & Greet tickets are $80. This special opportunity will take place in The Maryland Theatre Performing Arts Center from 1-2 pm and is limited to 75 people. 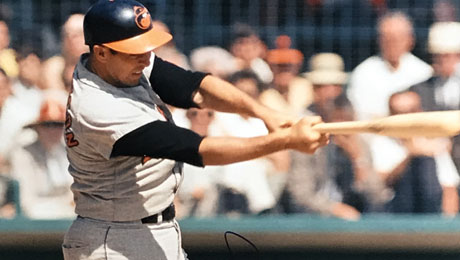